e-forecasting.com's U.S. monthly-GDP ™, rose in July by an annualized month-to-month growth rate of 0.3% to $19,059 billion of chained 2012 dollars expressed at seasonally adjusted annual rates, following an increase of 1.6% in June.

e-forecasting.com's U.S. monthly-GDP ™, rose in July by an annualized month-to-month growth rate of 0.3% to $19,059 billion of chained 2012 dollars expressed at seasonally adjusted annual rates, following an increase of 1.6% in June.

A popular "growth" number for economic performance - used by news media and well understood by the public – refers to the annualized quarterly growth rate in real GDP computed from the official quarterly data of the national accounts. For monthly frequency, the annualized rolling three-month growth rate in monthly-GDP ™, a monthly equivalent to quarterly-data growth rate, posted a reading of (+1.9%) in the three months to July 2019 from the previous period, three months to April 2019. 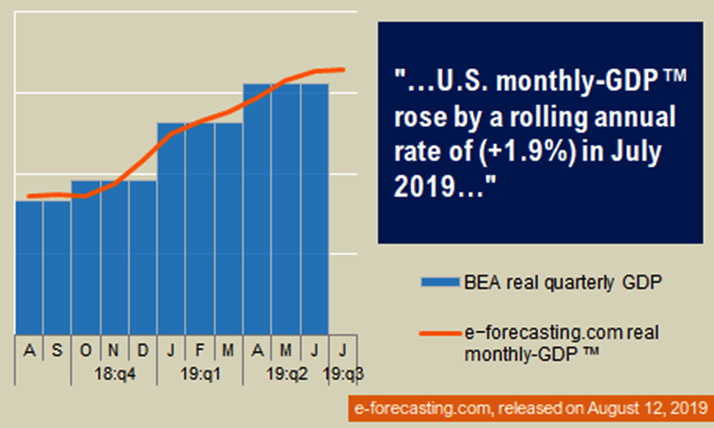 July's reading of the rolling three-month growth rate "was 1.4 percent point(s) below the country's potential 60-year average growth rate of 3.3%."said Evangelos Otto Simos, editor-in-chief of the Digest and professor at the University of New Hampshire.

In sum, the latest evidence from monthly-GDP ™ reveal that…"US economic growth in the third quarter of 2019 is in a slowdown growth path of the business cycle," Simos added.

Monthly GDP at "today's prices," which is officially called the market value of United States' output of goods and services expressed at seasonally adjusted annual rates in current market prices, posted a reading of $21,355 billion. Globally thinking, the size of the American market for doing business is about $21.4 trillion today.

The price index for monthly GDP, officially called the GDP price deflator - seasonally adjusted and set to equal 100 in 2012 - increased by an annual rate of (+0.6%) in July from the previous month to a level of 112.0. In other words, using the price index of monthly GDP, "…U.S. GDP-based inflation runs at a month-to-month annualized speed (rate) of (+0.6%).

The probability for the economy being in recession, which is detected month-by-month in real-time from monthly-GDP ™ with the help of sophisticated econometric techniques, registered 10.7% in July, up from 7.6% reported in June. When this recession-warning gauge is near or passes the threshold probability of 50%, it provides the first signals of an upcoming recession in the national economy. Historically, all past recessions were confirmed by this recession risk predictive analytic when its mark was in the 50%-100% range.

Logos, product and company names mentioned are the property of their respective owners.
© 2020 Hospitality Trends 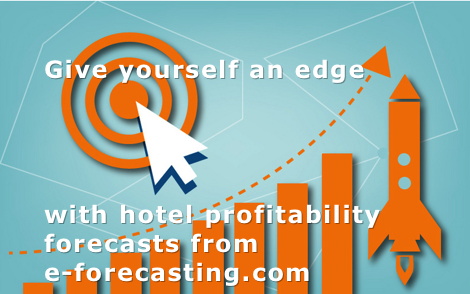